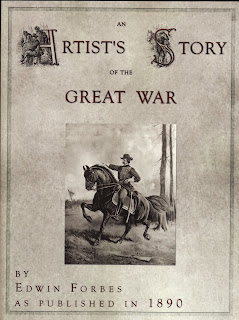 While searching Amazon for interesting Civil War things, I came across the book by Civil War illustrator Edwin Forbes. Alfred Waud, Winslow Homer and Forbes are considered the premier illustrators of the Civil War. What is so valuable about their work is the fact that they sketched what they saw while standing near the fighting. Whether it was on the battlefield, on the march or in camps they drew what they saw and unlike the photographs we see they can sketch action. Their relationships with the men made gave them access to every day activities. They drew what was there and not posed studio sessions with regular soldiers. We get a better picture now of what they wore and how they wore it. For historical purposes it is invaluable. The other great thing they did is capture the funny and the sad part of the war which is sometimes hard to do with the photographic equipment back then.


Most Civil War buffs have seen all three of artists’ works used over and over again in hundreds of books. It is rare to see something new even though you would assume there is much more of their work some place. This book re-published by Forbes is chock full of many I had never seen before. I was blown away how many different kinds of sketches he did in addition to the amount. I had never seen the original book from 1890 so it was a revelation to me. In the book he has sketches of even major Generals from the Union army and some of the not the best known. Have you ever seen a sketch of Gilmore at the siege of Charleston, Reynolds at Gettysburg (alive) or Halleck at the battle of Corinth? Not me. This book should be more popular with buffs, reenactors and historians.

A few things that surprised me the most in his illustrations is the common practice of blousing of the trousers, the Union soldiers depicted (by at least75%), using blanket rolls instead of knapsacks and the stranger variety of hats/caps then I imagined. He even illustrates some soldiers wearing Forage caps backwards and side wards. What the hell…?!

If you are familiar with Hard Tack and Coffee by John Billings you will get a good idea of how this book is layed-out. It is 319 pages filled with Forbes experiences and sketches in this reprinted soft cover book. The style is just like Billings’ book so if you liked Hard Tack and Coffee you will enjoy this as well. There are several books published with his work in them but I think this one by far is the best because it has more sketches and his own personal experiences written first hand. Buy it. An Artist's Story of the Great War should be on your shelf.
Posted by Don at 10:51 AM