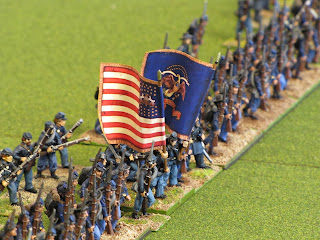 I playtested my game this past weekend. Had two good tests and when it was over I started to put the miniatures away. At the last second I stopped and thought I should line up one regiment one to one and see how it looked on the table. The basing is one model on a 20mm base. This isn't how the spacing would look in real life. As I spread the regiment out, filled in with file closers, company officers, general guides, field music and other assorted supernumeraries I realized I had a big problem. The regiment of models is HUGE! It was hard to take the pics and most of all with nice terrain. I packed up all the terrain and just layed-out the regiment for what it is worth. I gotta tell ya... it is REALLY cool looking! The pics don't do it justice. This regiment is supposed to represent the 141st Penn. at Gettysburg commanded by Col. Henry Madill in one to one scale. I might have more drummers than they had (I don't know for sure) and no fifers but I do have all the extra men needed to make a convincing looking regiment, don't you think? 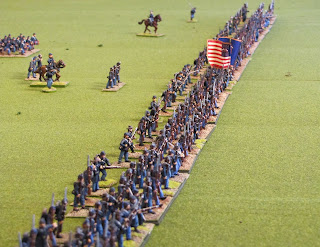 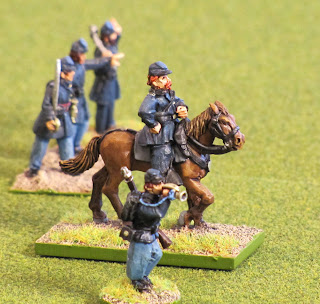 Here is Col. Madill himself with his bugler and staff officers. 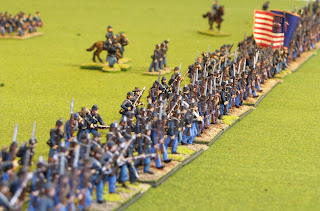 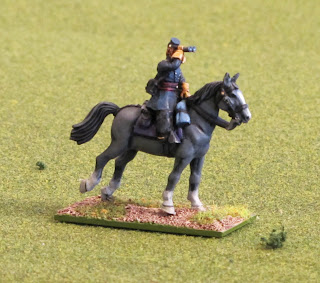 Here is Major Israel Spaulding who was killed at Gettysburg.

Here's the regiment is all it's small glory. The models take up 63" from end to end. The book Regimental Strengths at Gettysburg lists it engaged strength as 209. I have portrayed it as its June 30th strength which is the very last official muster/PayRoll strength before the battle 2 days before as 283. 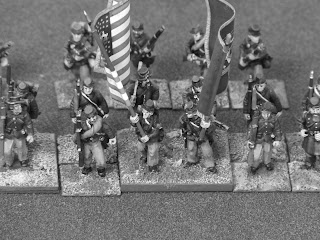