The 150th Anniversary of the American Civil War 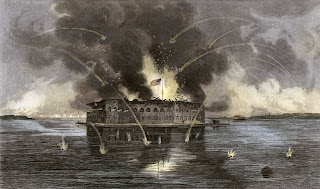 The time is now. I can member the 100th and all the events and coverage and then going to Gettysburg for the 125th anniversary of that battle. It’s just a number but it seems more special than the 100th and that’s probably because I’m older and more keyed into the history and its meaning.

In my reenacting ‘career’ I have participated in many anniversary events. I think the best one I’ve ever done was not a mega powder burning event but a rather simple Nation Park Service 135th living history program on the Antietam battle field. All we did was sleep on the battlefield for 3 nights, drill/ fire for the public and on Saturday night the Park Service, in conjunction with an acting troupe, put on a torchlight evening open to the public.

It was a very well planned evening and the public went from station to station seeing little vignettes from the battle at night. I was part of one group of about 100 wounded soldiers lying on the ground surrounding the Dunker Church awaiting medical attention. Inside the church was another vignette with surgeons amputating limbs and dressing wounds. We were bandaged and each soldier was instructed on: what unit he belonged too, what his injury was, where it occurred and we were told to make up stories about our families back home. The path that the public had to take through our wounded was a winding path in the dark with only one or two torches held in the air by the guides. The idea was to put the viewer in amongst the battle’s aftermath. They were cautioned before it began that it would not always be pleasant and happy. If they felt that it wasn’t their cup of tea they should not take the walk.

The eerie glow of the torches held aloft by the guides passing from station to station and the reactions of the public was really worth ever second spent there for the weekend. They had a few stations in which they would come upon a picket post of Union soldiers, a Reb and a Yank exchanging tobacco for coffee near a stream, McClellan’s HQ, Union soldiers sitting around a small campfire discussing the battle and what might happen the next day, the two Dunker church scenarios and a burial detail.

The last 3 vignettes had a huge impact on the viewers. When they went though our crowd of soldiers we would plead with them to carry letters home for our families, write a letter for us, ask for water and ask for prayers for our families which we’d probably never see again. There was enough moaning and suffering without going overboard. Some of us were even encouraged to sleep since not everyone would be still alive before they were able to get to see a surgeon. As the public moved through our soldiers, there wasn’t one peep heard and other than the soldier’s pleading and moaning you could have heard a pin drop. I don’t think they were quite prepared for what really was planned. It was so well done that even we were impressed!

After 5 or 6 minutes they were led into the grizzly scene of the Dunker Church. The actors inside and the fake amputations going on were very very well done and so real it was obvious that they had rehearsed and rehearsed many times over before doing the scenario portrayed that evening. We noticed that each successive group stopped while entering the church. There was a log jam at the door to get in because the scene played out before them made them stop dead in their tracks. The guides had to help move the viewers into the church so everyone could enter and get a look. Many of the people started getting emotional and some even crying. Several viewers rushed out of the church for fresh air.

I was told afterwards that the impression of the public was overwhelmingly positive. Even long after the event they received letters asking if there would be a repeat performance. It was one of those events that reenactors attend that will always stick with you. Newbies or “fresh fish” always like to attend reenactments in which there are huge battles and you go through over 150 rounds with thousands of reenactors. After doing a few of these it gets pretty old and boring. You look forward to events that really reach the public on a one to one level and you can hopefully teach them what the War was really about. You want them to realize it wasn’t about big battles but people from all over the county fighting for something they believed in so strongly that they’d give their lives to see it through. Average men fought and died and it could just as easily have been your neighbor or family member. That’s what it is all about. Once you reach this level you want to portray the soldier not with a modern watch on your wrist, not a cell phone on your pocket, no BBQ for lunches and not sleeping on a cot at night in a hospital tent with a sleeping bag. This is the 150th anniversary and the time to honor those who died.

This brings me to my final thought… preserve the battlefields! History is being bulldozed all over the country. There are many battlefields that hardly exist now and honestly some that are almost doing well enough to tread water. It is up to every citizen to help protect our history that once lost can never be returned. The link below is for the Civil War Trust. It is an organization which helps protect and acquire land for future generations. I urge you to contribute money to the cause of preserving what is left... while it is left. The web site states its mission as:

“The Civil War Trust is America's largest non-profit organization (501-C3) devoted to the preservation of our nation's endangered Civil War battlefields. The Trust also promotes educational programs and heritage tourism initiatives to inform the public of the war's history and the fundamental conflicts that sparked it.”

The name is new and maybe unfamiliar to you. They used to call themselves Association for the Preservation of Civil War Sites or Civil War Preservation Trust but it is still the same organization and still doing the same good work. 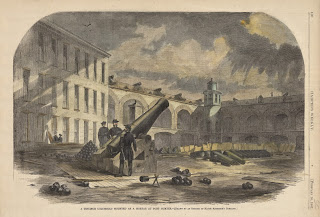 The website has a lot of cool stuff to look at. You can see animated maps of battles, photographs from the past and present, battle apps and video clips. You can start the 150th anniversary with a video all about the firing on Fort Sumter, which started the War. It’s all well done.

When President Lincoln gave his speech at Gettysburg in November of 1863 he said in part, “We have come to dedicate a portion of that field, as a final resting place for those who here gave their lives that that nation might live. It is altogether fitting and proper that we should do this.  But, in a larger sense, we can not dedicate -- we can not consecrate -- we can not hallow -- this ground. The brave men, living and dead, who struggled here, have consecrated it, far above our poor power to add or detract. The world will little note, nor long remember what we say here, but it can never forget what they did here. It is for us the living, rather, to be dedicated here to the unfinished work which they who fought here have thus far so nobly advanced.”

It is for us today to do our part to save the land on which they fought for future generation to appreciate and remember their sacrifice. Give generously if you can. The idiots supposedly representing us today are hell-bent to cut every dollar from the Government’s budget and we do not need money LESS money for our Parks, which is a miniscule percentage of the budget anway. It makes our donations count even more than ever.