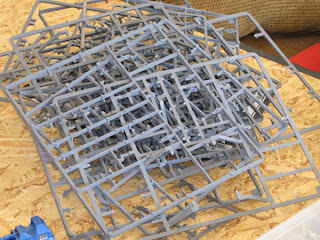 Leftovers from one day﻿
So… this has nothing to do with the Civil War. Yup, correct. It actually harkens back to my very early posts I made here about 40k. We are having a big 40k Apocalypse game on May 1st and I’m working on more Ultramarines for that game. The game will feature only a pure 15,000 points army of Ultramarines vs. the Bugs. The Ultramarine models will be drawn 99% from my collection. I have temporarily halted painting my ACW models for the time being to get more Ultramarines done. 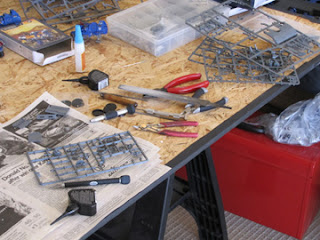 I started an Ultramarine army many years ago (around… 1988 or so) just to have another army for 40k instead of playing with the Imperial Guard. I was getting tired of painting and gaming with them and needed a change of pace. After completing a few squads and vehicles it sat quietly while other armies in different periods were completed. I’d say about 4 years ago I finally finished one whole company of them with all the trimmings. I was happy. Then 2 years ago we had a mega- Apocalypse game and I started painting more for that game. Well after that game I got the idea to do the entire Ultramarine since I was already on my way. Yes… the whole thing. Not being satisfied to do a mega-Peach Orchard/Wheatfield/Devil’s Den game which is bad enough, I now have _two_ superb projects. This deadline for the May 1st game gets stuff done. 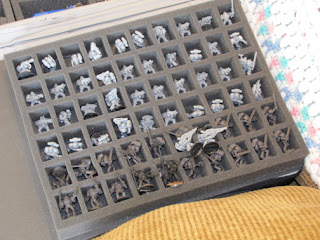 Ultramarines needing love and attention
In these pics you will notice the assembling yard of my ‘tank factory’. The great thing is I’m also putting infantry together and the other odds and ends I need. I probably have more than 15,000 points already but I need the stuff anyway so I’ll just keep getting stuff done until it is time to stop for the game. 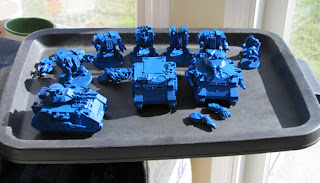 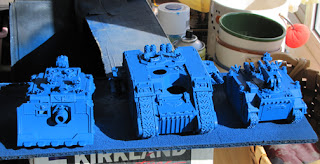 Undercoated vehicles ready to be painted.
In the big game we are using all the named characters of the Ultramarines, 3 full tactical companies, the Assault company, a Reserve company, the 1st Company and a ton of vehicles. I am following the codex for what a chapter would have and not maxing-out on cheesy stuff just to try to win the game. There will probably be 5 players on each side and all the Ultramarine players will use what they have and deal with it. I will hold some elements in reserve as the fight evolves to bolster an area or blunt Bug attacks. One thing concerns me is…. how do you stop 15,000 points of Bugs?! I don’t think we can kill that many quickly. For the life of me I don’t even know what 15,000 points of Bugs looks like. They will be using a few of the Forge World big bug things but what scares me will be the billions of little bugs running around. I have been assured there will be LOTS of them. *gulp* 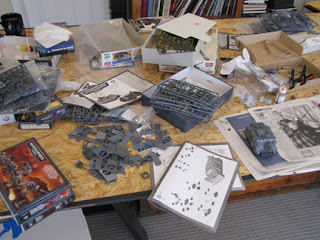 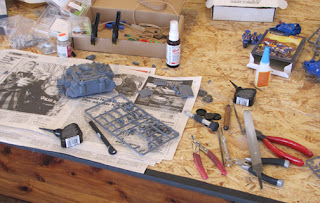