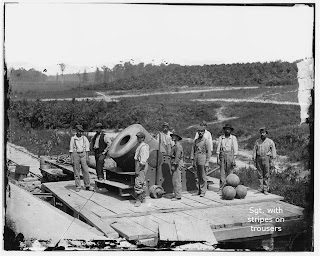 Here is a pic of the crew of the siege mortar, the Dictator, before Petersburg in 1864. For our purposes (painting and perhaps sculpting) it is a good thing to look very closely at the individuals in the photos. In this one, notice the Sgt. on the far right. On the outer seam of his trousers he has the wide darker blue stripe indicating him as a Sergeant. A Corporal would have a much thinner stripe. The privates have nothing. You could paint this on your miniatures if you liked but a word of caution, when issued trousers they would not come with stripes attached so a Corp. or Sgt. would have to sew them on himself. That involves work and not many bother once he was a veteran. The reason for the trouser stripes was to help identify who was an NCO when you had a Greatcoat on. Greatcoats did NOT have stripes attached to them so a stripe down the trouser leg would pick the NCO's out to others.

Also pay attention to the Forage caps (yes... not Kepis) and slouch hats worn by these Union artillerymen. The hats are different styles and colors. The same can be said for their shirts. A few here have the issue shirts and some do not. One soldier is also wearing boots and not Brogans. They also are not wearing Sack coats which is generally a social and military no-no when out-of-doors unless they are doing manual labor. 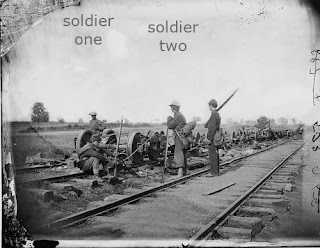 Okay here's another gem from the Manassass rail road junction. This was originally a stereo view but I clipped off the other view. Here we see Union soldiers amid the burned out rail cars. Soldier one, sitting on the tracks, has his trousers "bloused" or tucked into his socks and he's wearing a blanket roll. Soldier two has a hobo roll which I described in the 'painting Rebs' post. The last soldier on the right has no blanket roll or even a knapsack. His trousers also appear to be dark blue and not the normal sky blue color.