Before we get into painting our artillerymen let’s take a break and discuss what they did and how they did it. They are so different than infantry and cavalry in the war that they deserve extra time. They need our love and they earned it with their actions. You could argue that they needed more skill, determination, grit and dedication than the other branches. Who else would go into combat with NO weapons other than their artillery tubes?! Think about it. The crew members of each piece had no side arm or sword. The drivers of the limbers had pistols but theirs were mostly to shoot to death the wounded horses pulling their guns. The crew members of each gun even had to walk and run to keep up with the guns. Riding on the limber chests is mostly crap which is perpetuated by sculptors and people not in the know. What other branch of the service would the men put up with this nonsense, only the most dedicated or crazy?


Let’s separate the kinds of artillery pieces they used and what they fired at the enemy, alright? As the war progressed the myriad of types changed and older tubes fell out of favor. In the beginning both armies used whatever they had but over time smaller caliber guns and howitzers disappeared for the most part. Since the production of all guns was time consuming and expensive to produce the Southern forces found themselves behind the eight-ball and most importantly their production and quality control in the making of fuses REALLY hurt this service for the Confederates.

Whether we are talking about smoothbore pieces or rifled pieces the rounds they fired were essentially the same. They might have acted differently depending upon what fired it but right now we don’t need to get into too much detail for now.

Solid shot – This is what you might expect, they were solid rounds with no bursting charge and was not hollow. Any piece classified by a weight designation refers to its solid shot weight. So for example, the 12 pound Napoleon means that the solid shot for the Napoleon weighed 12 pounds. This type of round was used to batter earthworks/buildings into rubble, fired in counter battery roles or skip along the ground vs. infantry or cavalry to mow down long lines of the enemy.

In counter battery roles the key here was to destroy the gun carriage, kill the horses pulling the limber (and gun) and disable the piece itself. Even if an opposing crew could place a shell to explode directly over an artillery crew it might be very hard to cause many casualties because of the fact that the crew was somewhat dispersed while performing their duties. This fact never dissuaded them from trying but firing solid shot was the preferred method. Strangely enough, at the battle of Gettysburg the entire amount of rounds expended by the Union army tells a very strange story regarding solid rounds. You read account after account of counter battery action and the officers write that they fired solid shot, knocking out and putting Confederate guns out of action. You read about the success the Union batteries had over their Southern counter parts yet very very few solid rounds were actually used. Why is this? Well, if you read carefully you notice that they used a high percentage of their Case shot rounds. What I think happened is the gunners used the lighter weight case shot without punching the fuses to get the longer range instead of the shorter ranch of the heavy solid round. Obviously a lighter shell flew further and performed almost as good. More bang for your buck. One additional note: howitzers did NOT fire solid shots.

Here’s an interesting story for you as told to me at the 125th anniversary of the battle of Gettysburg by a US Park Ranger… During the artillery duel preceding Pickett’s Charge, a Union battery under Lieutenant Fred Brown (Battery B, First R.I. Light Artillery) had a Confederate solid shot strike the muzzle of one of his guns (Napoleons), dented the opening, killed the man about to load the next round, cracked the axle and damaged the left wheel. Another crew member picked up the next round and tried to slide it into the barrel. The ball got stuck in the barrel, half sticking out and half stuck in. A quick thinking crew member ran back to the limber chest and grabbed an axe. He tried whacking the shell with the flat of the axe hoping to just give it that extra push the have it pass the blockage. After hitting it several times they decide it was hopeless and retired the piece from the field. In the next 4 hours the piece cooled and shrunk the muzzle of the barrel almost sealing the ball permanently stuck in the muzzle. After the battle the gun was sent to the State House of Rhode Island as a souvenir of the battle. The gun stood there just inside the doors with a plaque explaining the story of “The Gettysburg Gun”. It was there for over 100 years, amazing visitors and thousands of people had their pictures taken with the gun over the years.


At some point someone thought, ‘The gun was in the act of being loaded at the time the ball got stuck. That means that the powder charge was inside the barrel… about 2 pounds of black powder. Oh my God! There is still black powder down there and has been for the last 100 years… aiming at visitors to the State House! ‘ Ooops.

Ever skip a rock along the surface or a lake or any body of water? It skips, skims and plows its way until momentum or a very solid object stops it. This is what the gunners did with solid shot fired at infantry and cavalry. Of course it is pointless to fire it perpendicular to a single line of troops because at most it might hit two men if you are lucky. The optimum situation is when you have a line of troops wheeling across your front. The Union gunners were presented with this opportunity during Pickett’s Charge when Confederate infantry wheeled to align their attack on the clump of trees. It was a nightmare for the attacking Confederates and a wet dream for Union artillery. It was payback for what the Reb gunners inflicted upon Union infantry at Antietam.


Case shot & Shell – These rounds were similar in that they had a hollow outer shell with a bursting charge using a fuse. The fuse was set in term of the amount of seconds when the fuse would explode. The Gunner would call out the amount of seconds he wanted the fuse to be set and this was done at the limber chest. Experience and the situation would tell him how long it should be set for. Confederate fuses were notorious for being unreliable. They might explode too soon, too late or not at all! They could just never predict what might happen. 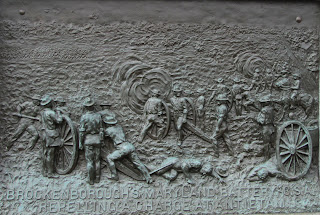 The difference between Case shot and Shell was what was inside… or not! Shell was completely hollow and filled with just black powder. The idea was the shell would explode and send large chunks of the metal outer shell flying in all directions causing massive damage. It’s a fine idea but in practice it rarely happened like this. You couldn’t predict whether it would break into two pieces or more. Some soldiers at the time wrote home how a shell exploded right over their heads and surprisingly hurt no one! An equal amount of stories would tell of metal chunks tearing someone apart. At Gettysburg a Union brigade commander from the 2nd Corps, Col. George L. Willard, had his face torn off by a chunk of shell.

Case shot was much more predictable and deadly. As long as the fuse worked and the shot was on target it could cause horrible damage to the enemy. The round was hollow, had a powder charge but the shell was also filled with dozens of iron or lead round balls larger than a Minie Ball. Once the outer shell shattered the spray of metal was almost like a canister round fired from above, below or among. This eye witness account from Gettysburg tells the story better than I can ever explain. Union officer, Lt. Robert Carter with the 22nd Massachusetts infantry, at the battle of Gettysburg, was with the skirmish line advancing to the Peach Orchard at the end of the battle. He reported, “Our tour extended across the swale, which had been swept by the 5th and 9th Mass batteries. The scenes of that spot, as revealed its dreadful horrors to our astounded gaze, still linger on our memories. Masses of Kershaw’s and Wofford’s brigades had been swept from the muzzles of the guns, which had been loaded with spherical case, with fuses cut to one second, to explode near the muzzles. They were literally blown to atoms. Corpses strewed the ground at every step. Arms, heads, legs, and parts of dismembered bodies were scattered all about, and sticking among the rocks and against the trunks of trees, hair, brains, entrails, and shreds of human flesh still hung, a disgusting, sickening, heart-rending spectacle to our young minds. It was indeed a charnel-house, a butcher’s pen, with man as the victim.” 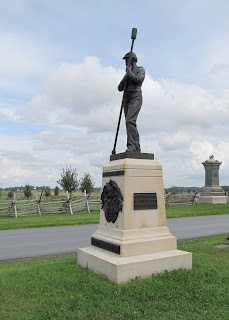 Canister – This was a very simple and easy to use round and probably the most effective round fired at closer ranges against attackers. It was just a tin can filled with iron balls. Once fired the can would tear apart and fill the air with the deadly missiles. It was like a giant shot gun. Not much skill was needed, just load, point and shoot. Many people assume that the range of canister was extremely short but that wasn’t the case at all. Artillery crew fired it into the air around the 300 yard mark to rain down on the heads of the enemy. Certainly firing it close up did the most damage. You could even fire two cans of canister but with only one powder charge. During Pickett's charge, a small group of about 100 Rebs broke off from the main assault at the Copse of trees and tried circling the 'rough ground' to the south. The only Union force in this area was Captain Cowan's 1st NY battery of 6 x 3 inch rifles. Seeing the Rebs rush at his guns he heard someone yell "Get the guns!" He ordered, "Double canister at 10 yards!" The six guns fired all at once. He reported that amid the smoke and flames he saw knapsacks, rifles, canteens, heads, arms, legs and chunks of flesh fly into the air. After the smoke cleared there was no one standing.