more on the 141st Pennsylvania 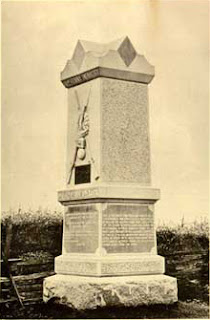 In reading the accounts of the 141st Pa I am struck with some seemingly odd things. After each chapter there is a description of many of the members of the regiment and there is a paragraph or two about them and how they died in battle. Now we know the literacy rate in the US at that time was very good but you are struck with the wealth of knowledge we can get from these histories. It’s very fascinating even if the writing is rather bland and let’s face it, many of these unit histories are. The key is you don’t really read and/or buy them for an edge of your seat thriller. You are interested in the story of that unit and many details you can never get from a book on any particular battle. There is so much there that only the veterans can tell.

I’ve been buying, collecting and reading these unit histories and memoirs from the veterans own private experiences for over 30 years now. It never ceases to amaze me how much stuff you can find out. Today’s glancing struck me in particular about the accounts of the soldiers dying in battle. With Veteran’s Day just having past and even thinking back to stories my Dad told me about what he did in WWII, the individuals in the 141st Pennsylvania hit home. Here a few of the types of little anecdotes you can find in the section after the battle of Gettysburg:

“Daniel Baumgartner, a brother of George, of Company K, who was killed at Chancellorsville, had since a lad been in the employ of J.T. Stafford, Esq., of Wyalusing, where he enlisted with Capt. Jackson. He was a brave soldier and fell at his post severely wounded in the thigh. After the battle he was removed to a hospital where he lived until the afternoon of July 23rd, dying at the age of 25 years of age. He was buried in the National Cemetery, Section C, grave 24.”

“Amasa Wood, a descendent of Lt. James Wells, slain in the Meadow massacre, and the son of Abner Wood, of Pike, township, near LeRaysville, a single man, and at his death about 23 years of age, was instantly killed by a Minie ball striking his head. He was Color Corporal of the regiment.”

The mention of the Meadow massacre happened Sept 1857. The Mountain Meadows massacre was a mass slaughter of the Fancher-Baker emigrant wagon train at Mountain Meadows, Utah Territory, by a local Mormon militia. You can read more about here if you are interested. http://en.wikipedia.org/wiki/Mountain_Meadows_massacre

“Loren Bennett was wounded in the leg above the knee, the limb was amputated, but he died at the Third Corps hospital on the 9th of July, leaving a widow and six children to mourn his loss. He enlisted from Towanda.”

There are teen pages of this kind of thing from Gettysburg. The regiment fought in the Peach Orchard on July 2nd. 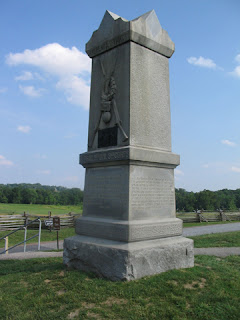