Discovering a 'new' book... sort of 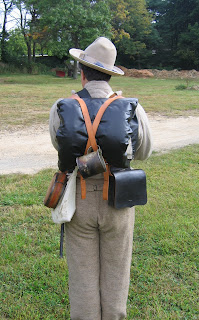 After being very busy the past 3 weeks, I finally started on a ‘new’ book. After finishing the last CW one and the Chapter’s Due I really didn’t have a lot of time to read anyway. Now that the dust has settled a little I spent Sunday night trying to come up with something a bit different. Strangely enough the choice was not a real search at all but fell into my lap.

I have a big bookshelf all to myself but it isn’t big enough. I have books piled on top of books and books in front of books. In between I have an odd miniatures unit of something or other in front of all these books. Yes, it is too cluttered but I’m at maximum density with books and miniatures. Wherever there is a 4 inch square of space I can find something to park in the open spot. It hurts me but I have to do it. As you might expect books always get somewhat forgotten because they are hidden for a few years unless I am actively looking of it.

On Sunday night I was actually looking for two miniatures that had fallen off a movement tray (a British Celt if you must know) and the fallen models had vanished into thin air. I moved stuff around thinking, ‘It’s got to be here somewhere. It’s not on the floor… as far as I can find.’ I shuffled this or that and knocked two books onto the floor in the process. *sigh* I hate it when that happens. This is when the book called my name.

Many years ago there used to be a book fair in Gettysburg on the closest weekend to the anniversary of the battle. I always attended it because the bargains were good plus they also had a relic show the same weekend. This was way before the Ken Burns’ documentary so it was before the CW became popular again and prices got out of control. Anyway, I used to buy 1st edition books for very low prices. At that time I couldn’t afford the books in mint condition so I’d settle for ‘good’, ‘fair’ or ‘reading’ copies. Aaaaahhhhhh… those were the days my friends and I thought they’d never end. Oh sorry… just traveling down memory lane for a moment.

At one of these book fairs I bought The History of the Hundred Forty-First Regiment Pennsylvania Volunteers by David Craft. The book was published in1885. The author was a Chaplain of the regiment. The regiment was in the 3rd Corps, 1st brigade, 1st Division at Gettysburg, Gen. Graham’s brigade and fought in the Peach Orchard. The book is a ‘readable’ copy. The price was great and I bought it not because I had a REAL reason to buy it other than it was in the Army of the Potomac. I bought many books or memoirs of soldiers if they fit into the AoP or the Army of Northern Virginia. So while trying to find those two Celts I rediscovered this book and decided I’d give it a shot and see if it was worth what I paid for it over 25 years ago… probably about $20 or less!

So far the book is better than I thought it would be. Sometimes these memoirs or unit histories are boring to read but this one is pretty good so far. It is also chock-full of small seemingly overlookable observations and incidents. They are the kind of thing that brings the plight of the ordinary soldier’s life into focus for us now. There are many incidents of long marches and suffering through the choking dust clouds. After 24 hours break storm broke on them. It became a quagmire of mud and non-stop rain. The soldiers are forced to sleep in the mud. One account tells of the march north trying to keep up with Lee’s invading army in the Gettysburg campaign. For 6 days straight they were marching in high heat and dust covering everything and getting into their food. Between the forced marches, heat, dust and blistered feet many fell out of the ranks in droves. One particular Lieutenant in the 141st complained that he got almost no sleep or food in the 6 days. After a brief cool spell it rained in torrents. He writes, “Every man was wet to the skin and covered with mud, but the wet blankets were spread on the wet ground and the men in their wet clothing flung themselves down to rest the best way they could.” The Lieutenant said he fell fast asleep even though he was lying uncovered in the rain with wet clothes, wet blankets, no dog tent and a useless gum-rubber blanket. He said he had the best night of sleep in a whole week! When it was time to fall in again, he collected his wet gear and fell into the ranks without breakfast and kept marching… but at least he got a good night’s sleep!
Posted by Don at 2:29 PM