For Christmas I picked up a few good books and a few great books. The two I mention today are superb for reference alone! 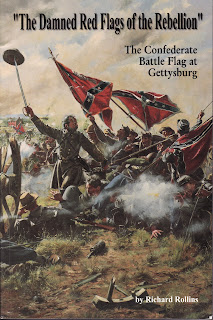 "The Damned Red Flags of the Rebellion" by Richard Rollins is a real keeper. It is 261 pages and is all about the Reb flags captured by Union regiments at Gettysburg. It was B&W drawings, maps and 40 pages of color plates showing 40 actual Reb captured  flags as they look today. It describes in detail how the flags were captured, where, when and by whom. Most of the book is filled with first person accounts of the men that lost their flags and/or the men that captured them.

This book should be in every library of CW buffs. 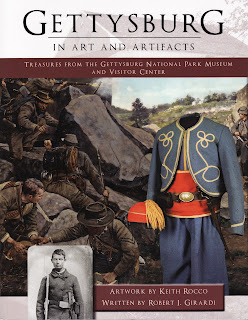 Gettysburg in Art and Artifacts is written by Robert I. Girardi and artwork by Keith Rocco. The book is 112 pages and filled with artifacts from the Gettysburg NPS collection and Rocco's paintings. The color pics of artifacts and paintings are arranged by day from the battle. Some of the artifacts have pictures of the original owners and a brief description and how it came to be in the Park's collection. Many of these items I have never seen on display at the Park's museum even when more of the collection was on display than today. If you love to paint, collect CW artifacts or just love this sort of stuff it's another keeper.

I also received two other books but have not read them yet. The Battle of Brandy Station by Eric J. Wittenberg is supposed to be THE book on the battle so I'm excited to read it. The book has good maps and quite a few pictures of the officers involved even the lesser known ones that you may or may not have seen before. Wittenberg has written several books on the war and if you pick any of his others up you won't be disappointed. I have read most of the and all are well worth it.

The last book is History of the 124th Regiment New York State Volunteers by Lt. Col. Charles H. Weygant. The book is a reprint of Weygant's original history published in 1877. Weygant served his career with the regiment during the war. Strangely enough, it is stated by some historians that Stephen Crane, who wrote Red Badge of Courage, lived in Orange County New York and actually interviewed many of the 124th's veterans before he wrote his classic book. The regiment was mustered from Orange County. Some of the incidents of his book mirror what happened to the 124th NY. 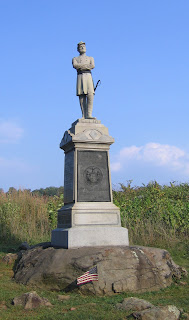 The monument of the 124th NYSV on top of Devil's Den at Gettysburg. The monument is topped by the statue of its Col. A. Van Horne Ellis. He was killed during the battle. The Don Troiani painting﻿, The Men Must See Us Today is about Ellis and the 124th NYSV, "The Orange Blossoms".
Happy reading.
Posted by Don at 1:14 PM