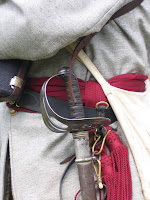 Okay there is always a division when painting, the gamers who love to paint (like me) and the gamers that would rather just game and not paint (if they could get away with it)and never painting a thing. I'm sure you've seen this thing before. You see several games underway and some guys are using a mix of: totally unpainted, undercoated and some miniatures with some paint slapped on them. The other gamers are using ONLY painted models and you can tell right off the bat from 15 feet away these guys who painted their models really put a solid effort into getting these models painted to the 9's because they care about each and every model. Both groups are having fun and why should we question either? The whole goal is to play a game and have fun, right?

I'm in the 'painted' guys group. I sometimes obsess over 'stupid' details that NO ONE will ever see or even care about but... I do. There are other times when I feel it is pointless to paint eye balls and every 17 buttons on a jacket. It never was this way with me though. I used to go totally anal on every model but it took way too long painting armies, let alone units so I could use them in a game. I was happy at the time with that approach but... now that I'm getting older, my hand is not as steady as it once was, spare time is harder to come by, my attention is split with other issues in life and I really want to use those dozens and dozens of unpainted armies that do not have a stitch of paint on them. I must admit I have been cutting corners. I need to get stuff done faster in the limited spare time I have. I have come to the realization that the painting gremlins are just a figment of my imagination. *sigh* Yes... it is true. *sniff sniff*

I seemed to have gone astray from my original thought... if I had one... but I am nowadays choosing whether to paint faster and not as well _OR_ paint as well as I can in my limited time. It seems on some days I just want to get stuff done and the next day I'm mad at myself because I rushed and didn't put forth my best effort. Am I getting old? Is this the deal? It's a dilemma which I am working with. More and more though I am trying to paint faster with the best quality that I can. I have changed my painting style in the past 3 or 4 years many many times looking for the fastest and bestest way but... so far I have not hit pay-dirt yet.

This Gettysburg project I decided to embark upon brought this whole thing to a head in the last few weeks. I need to get stuff done AND I want the models to look spectacular but... I have a feeling one will win out over the other. I was trying to do the piping on the 114th Penn. Zouaves to FINALLY get them done. I hate doing this sort of detail nowadays and I've been giving them the old 'good enough' job. Then I argue, 'Hey stupid... how many more 114th Penns are you going to need to paint? Just do it right and be done with them... jerk.' My reply to that was swift, 'Hey yourself, jerk! In the time it takes to do 10 Zouaves I can paint 30 generic Union infantry and that moves the ball forward even more than one stupid Zouave regiment jerk.'

Well... enough of this idol banter... I've got to get back to my inner argument now. See ya.