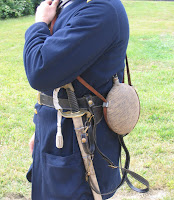 This past week (and over the weekend) I managed to finish 12 Perry plastic Rebs and started 6 more. The 114 Penn. is angry with me though. I try not to make eye contact with those models. It's kinda tough to do though.

While sitting around the hospital I came up with another crazy plan for my Gettysburg project. Yeah... I have crazy plans all the time. What I will try to do it to convert all the Brigade and Division commanders to actually make the model look like their dead counter parts. I don't mean zombie looking but as they did in their photos. I went through my pile of lead to start the stockpiling of mounted metal. So... on Saturday I rode out to the Warstore and bought a bunch of Perry mounted metal officers, both named and generic. The haul was about... 8 packs or so. I already own a boat load of Sash and Saber mounted officers and some older Foundry officers. It shouldn't be too tough at least I can get the beards right and that will be half of the battle. Don't be too surprised to see my likeness replacing someone but I just have to figure out who I want to be. :)

In addition to the above models I bought 2 more boxes of Perry plastics. I know what you are thinking.... they aren't very accurate and the detail is lacking as compared to the metal S&S and OG 2nd Generation. It's all true but they do paint up very quick. In total I think I've completed about 5 boxes so far. Once I mix them in with the metal figs they will be fine. Hey... I need to get a LOT of stuff painted so... I gotta do what I gotta do.
Posted by Don at 12:23 PM