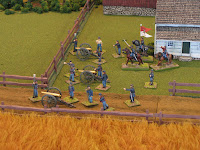 For the III Corps:


It would be REALLY cool to play it out but... to be honest it wouldn't be very
good without the brigades from the II Corps, V Corps and Reserve artillery.
Hmmmm... I'll need more men and guns.

The table space would be monstrous! I’ll probably have to spilt the tables
into action spots like:

Reb artillery would mostly be off-board to save space. You could have the
tables nearby to make it seem like one big battle though. They are
interconnected to a certain degree yet separate.

Once I have all I need painted I'll start on the 1st day's battle next. That
will be lots of fun too.

Always have a plan. I have several 'plans' so I am also working on a complete
Ultramarine Chapter with all the trimmings. I have completed one third so far
and still banging away on it. The other is this ACW plan to make BOTH complete
armies in 25mm at Gettysburg. My problem is I have too many plans and I get side
tracked. Damn those side tracking demons!!!!

Upon further review I need to buy and paint more men. Here's what I now need to
complete but NOT minus what I already own unpainted:

If I were to paint all 1256 models needed for infantry alone, paint to
completion a minimum of 6 per week it would take me 210 weeks to finish just the
regiments. That's only 2 years. Wow, that's easy! I'll be ready for the 150th
anniversary of the battle. Sweet!

This doesn't include officers, artillery and crew of the III batteries, the II
Corps, V Corps (with their guns) and the Union Reserve Artillery guns. Hmmmm...
I may have to put some overtime into this. Eating, sleeping, working, family,
the Ultramarines project and gaming are overrated anyway.
So far in the past 3 weeks I'm on schedule! Woo hoo!!!
Posted by Don at 1:12 PM