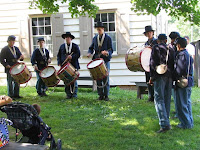 The picture above is from the web site of Co. H, 119th NYSV Historical association. You get an idea about what the drums and drummer boys might have looked like.

I've had questions about drummer boys and drums before. I had this discussion with a friend of mine (Mike E.) and decided to just cut and paste it here to save myself the trouble of re-doing it. Why go through all the trouble again and reinvent the wheel?!

Different companies made the drums. You could have special stuff painted on the side... or not. Usually an eagle was there but sometimes a state emblem.


"Then I shall pose the question: did they actually use drums on the battlefield or were they "little drummer boys" who got sent off the field (I think that there is a reference in "Stillness at Appomattox" that the drummer boys were sent from the field prior to Petersburg)."

----Many Companies when they formed recruited drummers and fifers. Once the regiments were formed they pooled all these into one big 'field music' unit. They could be boys or men; it all depended but no requirement. In times of battles they would normally be stationed well back of the firing and many times detailed to aid the wounded. They NEVER ever were with the Color Guard, never! Many were kids and they didn't want them killed or wounded. NO ONE wanted to write a letter home to little Johnny's Mom telling her 14 year old boy took a bullet in the head. The kids were their neighbors.

"Let me guess - at the start the drummers were men who took the field. As they all got shot they were replaced by boys who did not take the field."

---No, they could have started as kids or adults. One drummer boy in Co. H, 119th NY, G. Mott was 15 years old and was killed at Chancellorsville.

****We had a discussion about the Perry plastics and the drum in the box set of infantry:

----You can give the plastic drummer guy a rifle instead of the drum. I did that with mine. Take the plastic drum out to the driveway. Take a hammer and smash it so no one can use it ever again. It is WAAAY too big and it hangs wrong on the model. The Perrys messed up this in their set. Not enough research.

Links of drummers and drum pics.

Here’s a link to a drum at an auction. The dark color would have been a dark blue surrounding the middle.

I just double checked and some of these links got messed-up by this blog thingie. Sorry about that. You might have to click on additional links if it seems to drop you at a main/home page. Drats!
Posted by Don at 12:15 PM