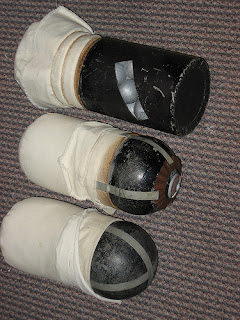 These Civil War shells had nothing to do with this weekend but just thought I'd post them. Top to bottom:
﻿The white cloth material holds the powder.
Well it was a great event this weekend. The hotel was a very nice location for the convention. It is the Crowne Plaza just off the NJ Turnpike at Exit 16W. The hotel had plenty of parking and easy access in and out if you had a bunch of stuff to haul. The hotel room rate with convention discount was LESS than what we've been paying at the Host hotel in Lancaster for the HMGS East shows too. Can't beat that! For me the drive was just one hour which was a first ever attending a miniatures show in under 4 hours! The weather was nicely mild and sunny so you can't get any better than 2 days of gaming with your buddies and new friends! Rumor has it that there will be another one next year. I hope so.


Neal and his staff did a fabulous job running the event and there was plenty of room for everyone. There were tournaments and lots and lots of demo games all weekend. For me the MOST impressive were 3 games put on by a gentlemen, Matt R. He put 3 different games on and the miniatures and terrain was really really nice. They were pretty damn cool looking.


They had a silent auction for stuff, kind of like a flea market sale. The difference was that the prices were VERY good. I'm not sure enough of the gamers there knew or cared to look into it. I got two HUGE deals and I was shocked how cheap it was because there were so few bidders. If I had known there would have been so much good stuff and so few bidders I would have bought everything not nailed down! A buddy of mine ran up one of the items I was bidding on. Wise guy. He didn't really want it; he just wanted to bust my chops. Grrrrrr......


We ran 3 games and had lots of fun. Neal himself played in our Hastings game. He commanded a few Saxon unit/regiments and Harold the Saxon King. The game went right down to the turn. It was a very close game decided right at the very end. Next year I'll run a massive Civil War game to playtest a scenario for my game. I didn't do it this time because I didn't have enough time to make the needed terrain.
Posted by Don at 3:09 PM