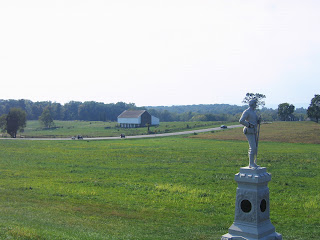 The picture above is taken from the famous Rail Road Cut. The camera angle is facing SouthWest. In the same pic below I've pointed out features of the terrain in case you have never been there.

You will notice the Union side of the Ridge and once on the reverse slope (the Union side) you can't be seen by Rebs approaching from the West along the Chambersburg Pike. If you read accounts from the participants they used the reverse slope for an aid station until the Union lines began to collapse. When you read them it doesn't make sense but looking at the picture or going there you can see why.

The Herbst's woods was where the Iron Brigade fought. Near the barn and house is where Stone's brigade fought after Cutler moved out. The open ground around the barn is very exposed to the West, North West  and the North (where Rodes division entered the battle) where all the Confederate artillery was unlimbered to pounded the area. The few trees along the top of the rise on the right side of the pic were not there during the battle. When you go there you can understand why Stone's brigade and the Union artillery stationed there had a hard time, receiving flanking fire. 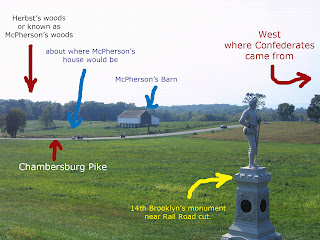